So i got lucky and managed to get my hands on the 25th anniversary model at the local store before they all sold out.  overall it's a really nice model, and I'm trying to take my time with it and put more techniques into the paint scheme than I normally bother with, such as drybrushing.  It's interesting doing a color scheme where you have the option of a drybrush; most of my models I do in metallics and play with clearcoats to get the depth I want, but the Crimson Fist livery is a matte color, so the drybrushing's really helped to pick out details.

here's some photos so far: 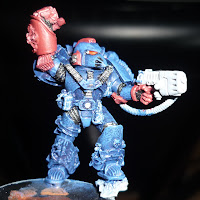 As you can see, the drybrushing's done a fair job on the blue.  I think they'd actually call it an overbrush-style of drybrushing, since I pulled some of the lighter blues down into the plates to get a light source effect from him standing in the open.

The first 3 photos are with the flash on, which really made the shades stand out, but the last 3 are in a light box without the flash, and the blue comes out looking darker and less shaded in those 3. 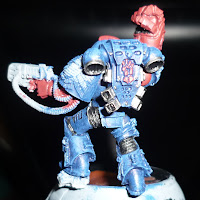 I thought about making another drybrush with a lighter blue, but I'm worried any lighter shading will make him look more Ultramarine than Crimson Fist so I think I'll leave him as is.

My current problem is deciding on how to shade the reds, especially his power fist.  The only reds I own at this time is Mechrite Red, which its based in now, and Blood Red, which I used on his eye lenses. 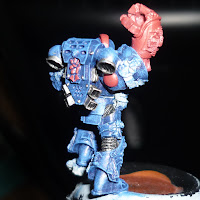 For a list of what I've used to paint him with so far, I started with a basecoat of Army Painter Uniform Grey.  Lately my preference for primer is grey since its easy enough to go light or dark colors on it and still get a nice effect. Probably going to use this from now on on all models unless they'll be predominately black or white.

The blue is a first coat of Necron Abyss, followed by an overbrush of Regal blue, followed by Mordian Blue.  Very simple, but gives a nice deep blue with depth. 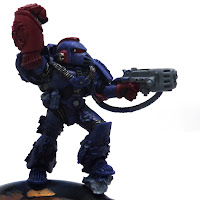 If this was to be used in a darker-lit area, such as a gaming table, I'd probably add another drybrushing, focusing more on the edges, with a mix of Mordian Blue and Ultramarine Blue or Enchanted Blue.  But as this will be a display case model, where it'll be well lit, I won't worry about that.

The black armour bits are basecoated in Chaos Black, and then drybrushed with Boltgun Metal on the raised bits, to make them stand out more. 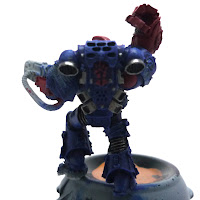 The eye lenses were basecoated Mechrite Red, followed by Blood Red, with a dot of Skull White in the back corners, and then outlined with Chaos Black on the bottoms of the lenses. 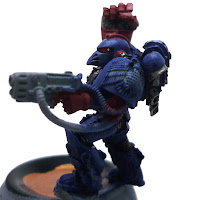 Posted by Dusktiger at 1:29 PM